Good security is all about people. And when you choose Think Security First!, you’re giving your people the very best.

Neal O’Farrell is quite simply one of the longest serving security experts on the planet, 40 years and counting. And more than 20 years ago, was one of the first experts to champion the importance of  security education and awareness in the security mix.

A PASSION FOR EDUCATION

More than twenty years ago, in 2000, Neal was appointed the first ever Director of Education for a security company (ZoneAlarm, now Check Point). Even by then he’d already been in security for nearly two decades.

That same year, Neal wrote a ground-breaking series of articles for SearchSecurity.com urging a greater focus on “the human perimeter” as a defense against all kinds of cyber threats. His article “Security Training: A Call To Arms,” was selected by SearchSecurity.com as one of the Top 10 Executive Briefings. 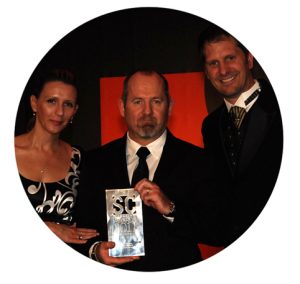 Shortly after that he started building employee security awareness courses, for firms like bebe Stores and Cost Plus World Market, and nearly twenty years later, World Market is still a client.

He later co-founded the Center for Information Security Awareness, a partnership with FBI/InfraGard to provide free employee security awareness training for individuals and small businesses. Neal created the entire course, test, and certification, and that course has since been accessed by thousands of organizations.

Neal was invited to Chair the first “Cybercrime on Wall Street” conference hosted by the Institute for International Research (IIR). In 2002 he launched Hackademia, a partnership with security publisher Syngress (now part of Elsevier) to turn their collection of Hack Proofing guides into online security training courses.

Hackademia is now part of the University of Washington. Neal served as Technical Editor  and contributor for one of the first in the Hack Proofing series, “Hack Proofing Your Wireless Network.”

THE HISTORY OF THINK SECURITY FIRST

The program slogan was “Think Security First!”, a mantra that is even more important more than 20 years later.

Partners in the yearlong initiative included Microsoft, Cisco, McAfee, and AT&T, and received the endorsement of the US Chamber of Commerce, the Department of Homeland Security, and the International Information Systems Security Certification Consortium, Inc. (ISC)².

Over his 40-year career Neal has worked with governments, the intelligence community, the financial community, Fortune 500 companies, thousands of small businesses and millions of end users and consumers. Neal started his career in security protecting European banks and governments from the first generation of hackers, including winning the first ever contract to encrypt Ireland’s entire national ATM network in 1988. He was also a member of the first Federal Communications Commission’s Cybersecurity Roundtable, where he helped develop one of the first online security planning tools for small firms.

He was also the only security expert invited to advise the Congressionally-mandated Stock Act panel in 2013, empanelled to study the security and privacy implications of greater financial transparency by members of Congress and senior federal employees. As part of that study, over a period of six months Neal participated in in-depth interviews on national security and privacy issues with nearly sixty organizations including the Department of Defense, Department of Homeland Security, Department of Justice, the Office of National Counterintelligence, Office of the White House General Counsel, SEC, FTC, FBI and nearly twenty other executive branch agencies.

He has worked with hundreds of police departments, Neighborhood Watch groups and community action organizations. He also takes on complex cases referred to him by the FBI and U.S. Secret Service. In 2011 the Council was honored with the 2011 Editors Choice Award from SC Magazine, one of the cyber security industry’s most prestigious awards. Previous winners include the NSA.

His book on identity theft has been used by three of the top five U.S. banks to educate their customers on identity theft prevention. Neal is also the Executive Producer of the documentary series In the Company of Thieves that goes inside the world of professional identity thieves, and has appeared on the Discovery Channel’s Investigation Discovery series.

Neal is a member of the Online Trust Alliance IoT working group, and in 2015 he was honored as the first ever recipient of the Eigen Award, presented by the International Association of Certified Fraud Examiners at the headquarters of Wells Fargo Bank in San Francisco.

Neal has acted as advisor to numerous security firms including ZoneAlarm (now Check Point), Surf Control (now Websense), Ntru Cryptosystems, Securify, and SiteLock, and identity protection firms like PrivacyMatters, EZ Shield, IdentityGuard, and Credit Sesame. He was an advisor to blockchain startup Civic, one of the first startups to complete a successful Initial Coin Offering (ICO), and is currently an advisor to Adaptable Security, DropVault, Taliware, and a Fellow of the EP3 Foundation.

He has authored more than a thousand blogs and articles on security and privacy and has been quoted in numerous publications around the world including the New York Times, Forbes, Inc., the Wall St. Journal, the Huffington Post, CNN Money, BusinessWeek, USA Today, SmartMoney, CNET, Information Week, the National Law Journal, Today.com, NBC, CBS, CNBC, Fox Business, and the South China Morning Post.

A DEEP BACKGROUND IN SECURITY

In the 1980s, at the birth of the cybersecurity industry, Neal was helping governments, banks, and intelligence agencies protect their most sensitive communications. In the mid-1980s, after a phone tapping scandal, he developed a telephone privacy system for the Irish government, and later went on to work with Nokia to incorporate privacy and security into their first generation of cell phones.

In 1988 Neal won the first contract to encrypt Ireland’s entire national ATM network, the same year he installed the first two-factor authentication system in an Irish bank. He also co-hosted with IBM one of Europe’s first network security conferences.

In 1989 he started the Intrepid project, a government supported program to develop a European rival for the NSA’s Secure Telephone System (STU3), considered the world’s most secure, secure telephone system. The result of the project was the launch of Milcode, widely considered the most secure secure telephone of its time. That project brought Neal into direct conflict with the NSA and that story is chronicled in his upcoming book The Man from Intrepid.

Neal also developed Faxcode, the world’s first fully encrypting fax machine, and resulted in his selection as the first Irish entrepreneur to be invited to participate in the Export to Japan study program hosted by the Japanese government.

Neal later went on to work with a number of British defense companies to develop a new generation of telephone privacy and encryption systems, and was the first Irishman invited to visit GCHQ, Britain’s ultra secretive spy center. He also worked with Britain’s largest bank to develop the first generation of voice verification biometrics for the bank’s telephone banking system.

After years of struggling with his own personal mental health issues, Neal is now focused on changing the way we address mental illness and wellness. As part of the NIST Global City Teams Challenge (GCTC), he is leading the creation of a blueprint for mental health for future smart cities.

He founded the nonprofit Mynde Project to provide free mental health education portals to cities and counties across the country. And he is also involved in a program to make our cities and communities more mentally and emotionally resilient.

He recently launched Get A Grip to provide free training on mental health and stress management.

“Neal is passionate about this subject and you can see that in the way he presents the material and the assistance that he offers to clients and non-clients alike. I highly recommend him…”
Helen Szterenfeld, Conference and Marketing Manager, BKR International.

“Your messages on cyber security were excellent (and scary) and truly aligned with the needs of the audience. Moreover, your energetic presentation style was infectious. Thanks again for presenting such an enjoyable session.”
Debbie Warner, Vice President, Education & Career Services, IMA (Institute of Management Accountants)

“When we asked the FBI if they could recommend a security expert, they unequivocally recommended Neal O’Farrell. They said if we couldn’t get him in person, have him get on the phone and call it in. He’s that good.”
Wealth management firm, California